Seeds are a vibrant and vital foundation for food sovereignty, and are the basis for a sustainable, healthy agriculture.  We understand that seeds are our precious collective inheritance and it is our responsibility to care for the seeds as part of our responsibility to feed and nourish ourselves and future generations.

The mission of the Indigenous Seed Keepers Network (ISKN) is to nourish and assist the growing Seed Sovereignty Movement across Turtle Island ( North America). As a national network, we leverage resources and cultivate solidarity and communication within the matrix of regional grass-roots tribal seed sovereignty projects.

We accomplish this mission by providing educational resources, mentorship training, outreach and advocacy support on seed policy issues, and organizing national and regional events and convenings to connect many communities who are engaging in this vital work. We aim to create a collaborative framework and declaration for ethical seed stewardship and indigenous seed guidelines for tribal communities to guide them as they protect their seeds from patenting and bio-piracy.

We support the creation of solutions oriented programs for adaptive resilient seed systems within tribal communities to enhance the creative capacity to continue to evolve as the face of our Mother Earth changes.

ISKN is a shade tree of support to the essential work of regional and tribal seed initiatives , as we offer a diverse array of resources aimed at nourishing and supporting a vibrant indigenous seed movement, as a compliment to the growing Food Sovereignty movement within Indian country.  In honor of the grand lineage of Seedkeepers who have faithfully passed down seeds for our nourishment, we make restored commitment to care for these precious seeds for those yet to come. 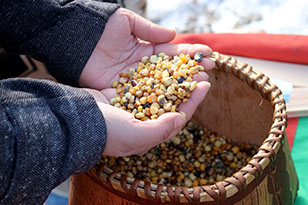 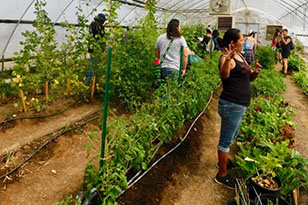 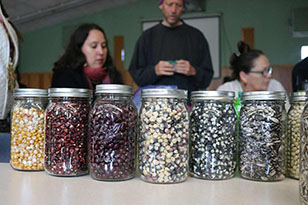 We design, facilitate and implement Seed Stewardship Mentorship training that is culturally appropriate. Our core services are centered on farmer education and mentorship. We have a strong focus on facilitating regional collaborations that uplift and empower peer-to-peer mentorship, bringing together farmers, gardeners and food/seed advocates together to share best practices.

Through mentorship and education, we empower and strengthen community members ability to not only grow good seed in their communities but also grow the next generation of seed stewards and protectors.

Through the Indigenous Seed Mentorship Initiative, we will assist in the reclamation of a critical aspect of indigenous culture by helping communities to revitalize traditional seeds and food. Our Mentor program for seed stewardship is rooted in the restoration of relationships between communities and their seeds. This work complements community initiatives that focus on the cultural restoration of relationships that is inherent in agricultural revitalization.

The Seed Sovereignty Assessment reviews the functions of seed systems in communities through both formal and informal usages. It assesses both availability and access to seeds of adequate quality. This approach promotes strategic thinking about the relief, recovery, development as well as culturally appropriate and traditional uses of seeds. The assessment focuses on the specific seed security problems communities face, and then steers response to actions which assist in improving access as well as systems.

The Seed Sovereignty Assessment toolkit will assist Native communities in their efforts to reclaim their local and traditional seed systems. This resource will help demystify the diverse and dynamic process of creating a vibrant regional and culturally relevant community seed project and help identify the steps needed to create resilient seed stewardship mentorship networks. The mentorship will offer tools and a framework for Native communities to increase seed/food security through asset mapping and facilitated strategic project mapping. We will also empower these emerging agricultural leaders to engage their communities in the necessary conversations around food and seed literacy.

Across Turtle Island, there is a growing inter-generational movement of Indigenous people proud to carry the message of the grand rematriation of seeds and foods back into our Indigenous communities. Some of these seeds have been missing from our communities for centuries, carried on long journeys in smoky buckskin pouches, on the necks of peoples who were forced to relocate from the land of their births, their ancestral grounds.

Generations later, these seeds are now coming back home to communities of origin, from the vaults of public institutions, seed banks, universities, seed keeper collections, and some lying on dusty pantry shelves of foresighted elders, seeds patiently sleeping and dreaming.

Seeds waiting for loving hands to patiently place them into welcoming soil once more so that they can continue to fulfill their original agreement to help feed the people.

In the seed movement, we have begun to use the word rematriation, instead of the more patriarchal repatriation, as it relates to bringing these seeds home again. In many communities, including our Mohawk tradition, the responsibility of caring for the seeds over the generations is ultimately within the women’s realm.

Both men and women farm and plant seeds, but their care and stewardship are part of the women’s bundle of responsibility. So the word rematriation reflects the restoration of the feminine seeds back into the communities of origin. The Indigenous concept of rematriation can also encompass the reclaiming of ancestral remains, spirituality, culture, knowledge, and resources. It simply means back to Mother Earth, a return to our origins, to life and cocreation, honoring the life-giving force of the Divine Feminine.

Relationships and partnerships are being developed to ensure that communities who have been absent of their seeds are reunited with them, and that in many cases those seeds are then reunited with their ancestral soil. This process often entails policy documents and negotiations, but also spiritual and emotional work—developing new ceremonies and protocols to welcome home these relatives, as well as acknowledging the elders who have worked for so long to make this movement possible.

In order to keep offering these programs, we need your help!